The Electrospray Deposition Method is a process by means of which a liquid is transformed into a fine mist. This transformation is brought about by the application of a very high voltage electric field to the capillary through which the liquid passes. In recent years, this methodology is widely used as an ionizer for mass spectrometers.

The Electrospray Deposition Method (ESD method) is the technique of spraying various kinds of solution of biomacromolecules and/or synthetic polymers, to make them form nano-sized particles and fibers (nano-fiber), and to let them accumulate and adhere on a substrate using electrostatic force. While electrospray is a very complicated physical process, which is not fully understood, generally what happens is as follows.

counter electrode, a strong electric field is generated at the tip of the capillary, due tos the effect of electric field concentration. As the liquid begins to exit from the capillary, it forms a conical shape with the electrically charged ions gathered on its surface. (This is called Taylor cone). Subsequently, when the electrostatic force becomes stronger than surface tension, the liquid erupts from the tip of the capillary to form a fine jet. Since the jet is highly charged, the liquid immediately turns into fine droplets to generate spray with each droplet spilt from the next by electrostatic force. (This is called the Coulomb Explosion). The droplets formed by means of electrospray are tiny.

Therefore, the solvent evaporates and dries in a very short period of time, and as a consequence, it forms very fine nano-particles. These charged tiny particles are attracted to the counter-electrode by electrostatic force, and are deposited in various patterns, which can be controlled by mask(s) made of insulating material and/or additional electrode(s).

The ESD method has been conventionally called "the construction method which does not come out of a laboratory" because of the lowness of the productivity. However, with how to have developed the nanofactory, productivity improved by leaps and bounds and succeeded in utilization. 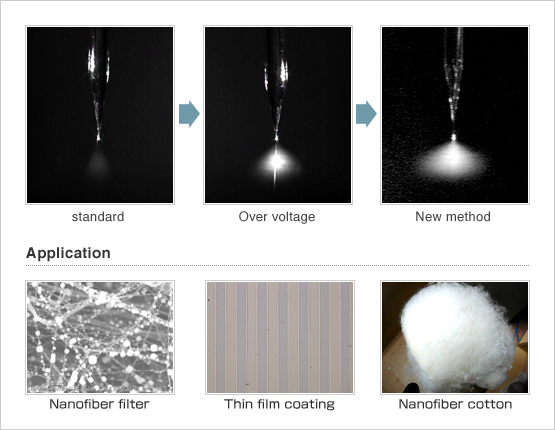